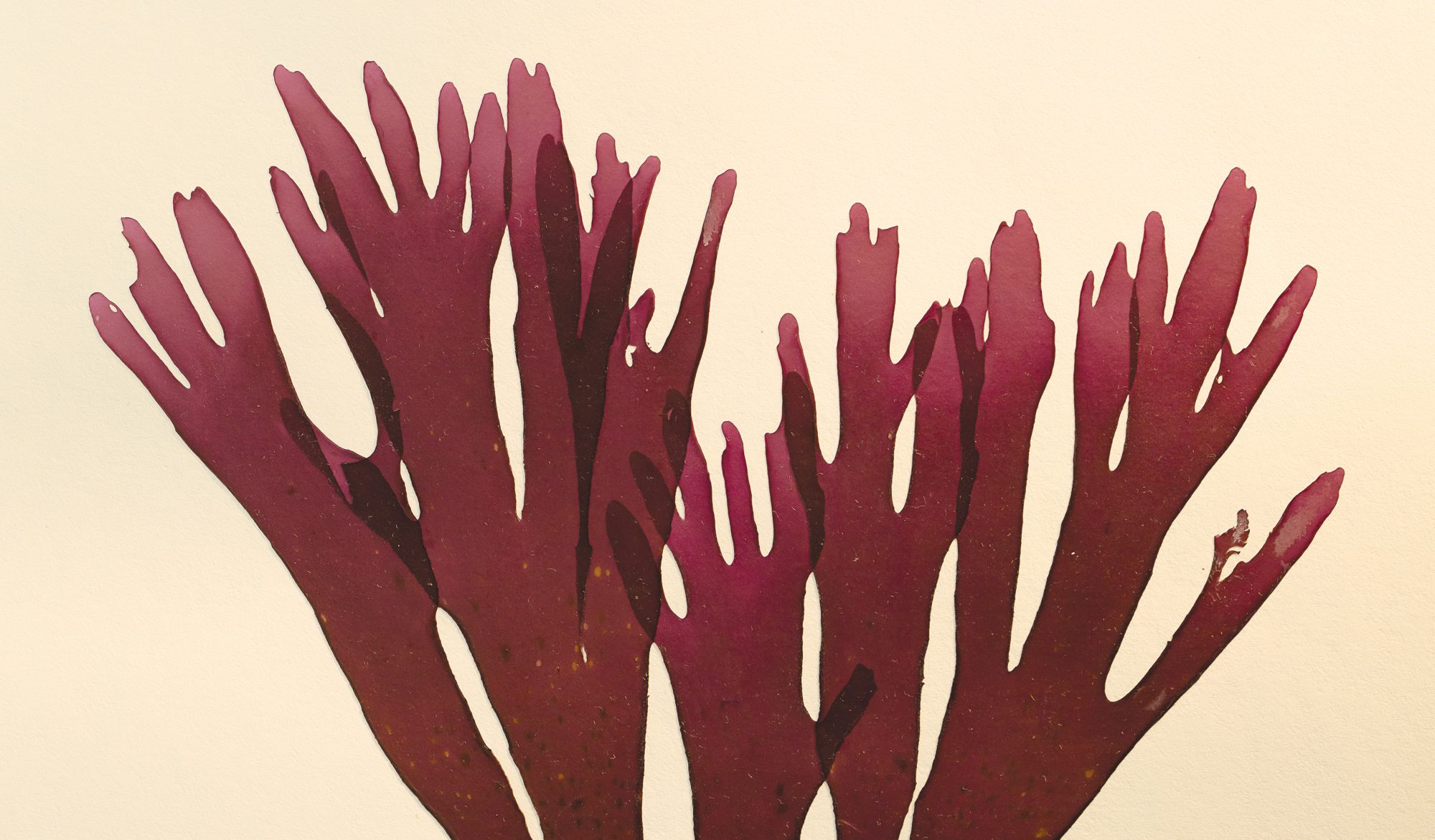 I have been studying the distribution of the more than 160 species of macroalgae along the Sonoma Coast. Our local algae grow in habitats ranging from sheltered sand and mudflats to the most wave-swept outer coast rocks, and many species only grow attached to other species. In extreme cases, a single alga attached to rocks may have four or five other species growing on it. This lifestyle, called epiphytic, is possible for marine algae because unlike terrestrial, vascular plants, algae do not have roots, and they absorb necessary nutrients directly from seawater through all their tissues.

My pressed scientific specimens are a way of showing the beauty and diversity of marine life along the northern California coast. Documenting marine algae is also valuable to students and researchers as climate change, development, and worldwide pollution induce changes in our environment. 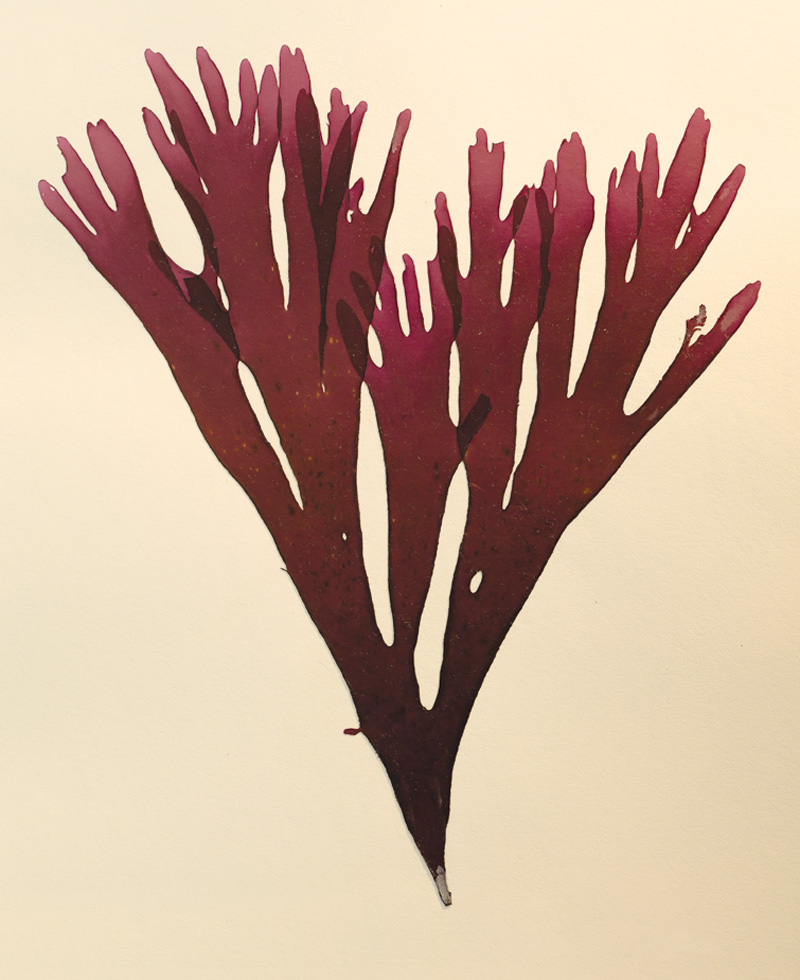 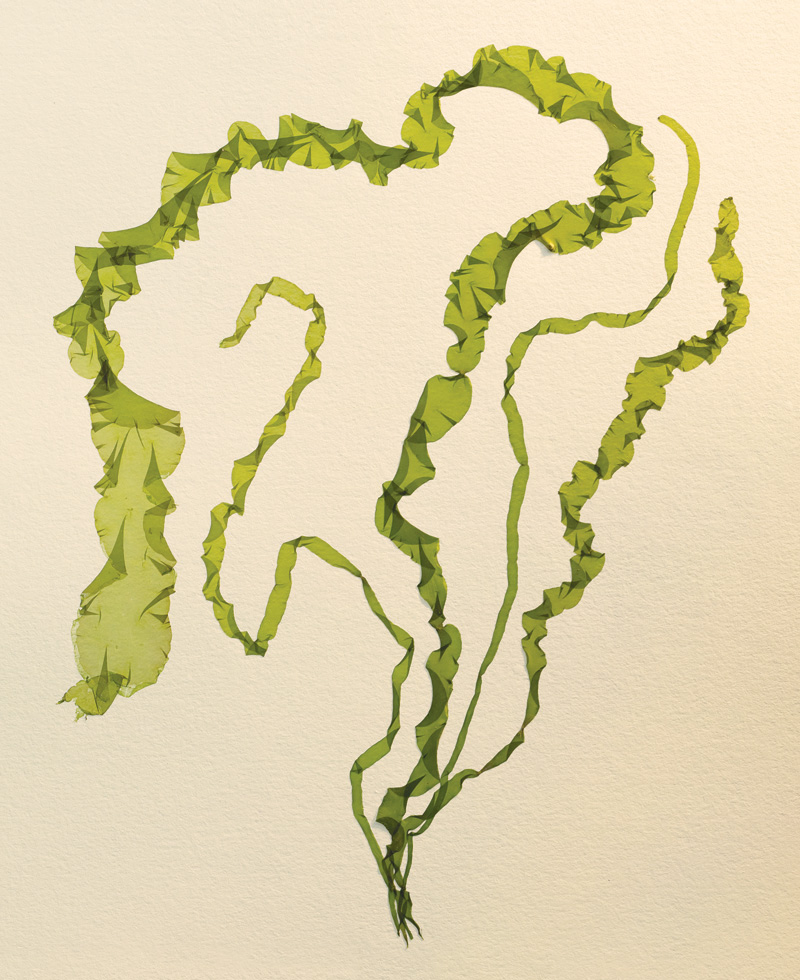 Ulva linza grows on intertidal rocks and sand flats along the Sonoma Coast in areas protected from heavy surf. Its bright green color and slender, ruffled ribbons make it the loveliest of the green algae, Chlorophyta. 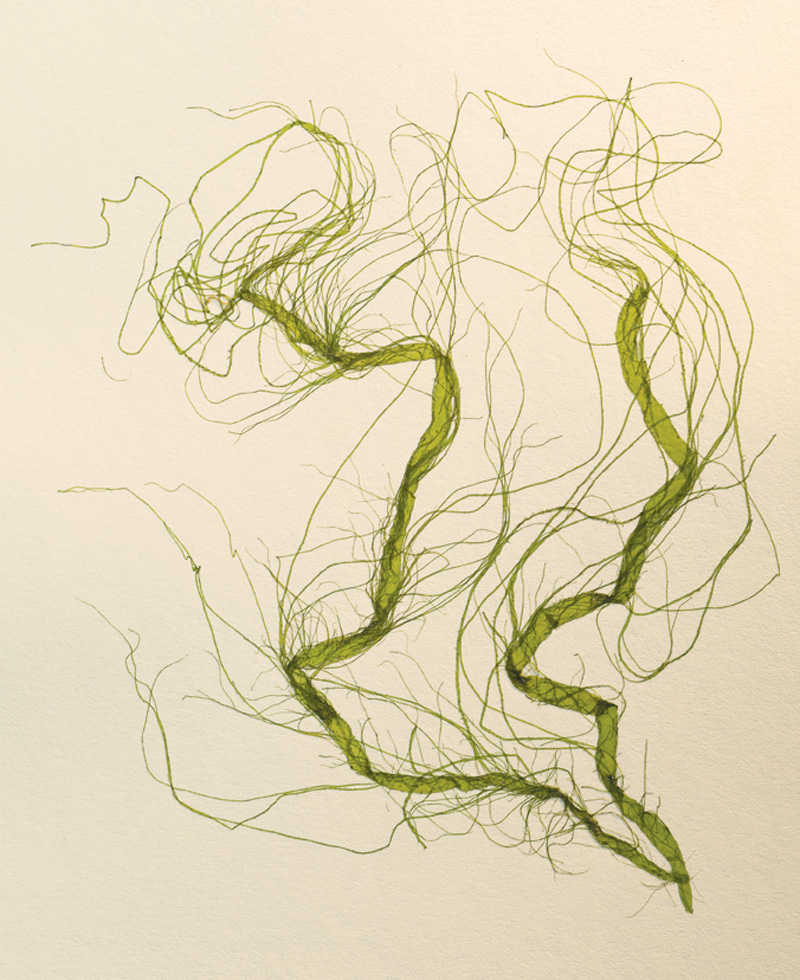 The thin, hair-like tendrils of Ulva clathrata bear little resemblance to the rest of the Ulva (sea lettuce) genus. This small, bright-green alga grows in protected bays and estuaries, either attached to rocks or free-floating as a dense mass. 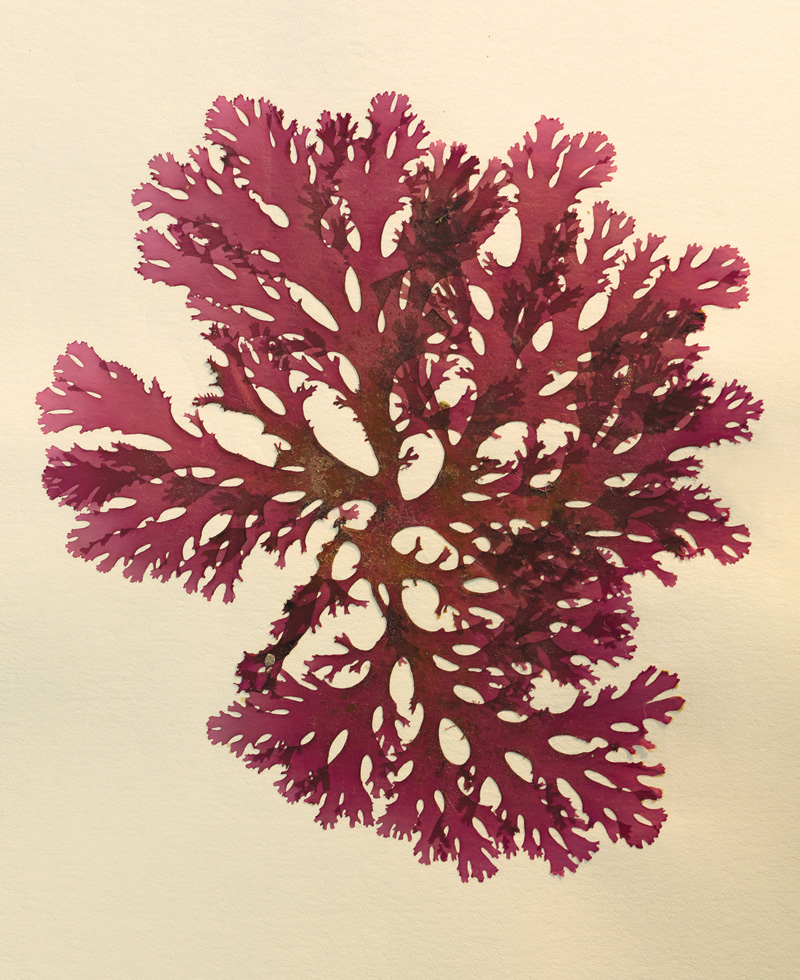 The beautiful alga Callophyllis flabellulata grows on subtidal rocks or on other algae in the Bodega Head area. It is classified as a red alga, Rhodophyta, named for the characteristic pigments that give most species in this group a reddish tint. 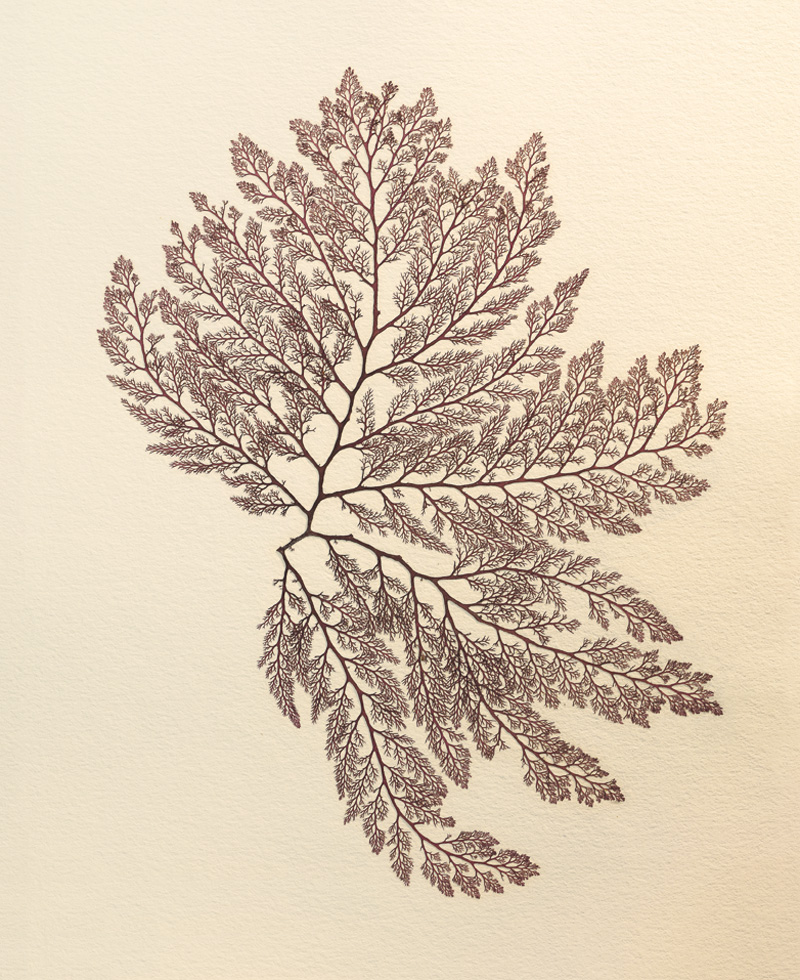 Microcladia coulteri is a common epiphytic alga that grows on other algae in the Bodega Head area. It is classified as a red alga, Rhodophyta, named for the characteristic pigments that give most species in this group a reddish tint. 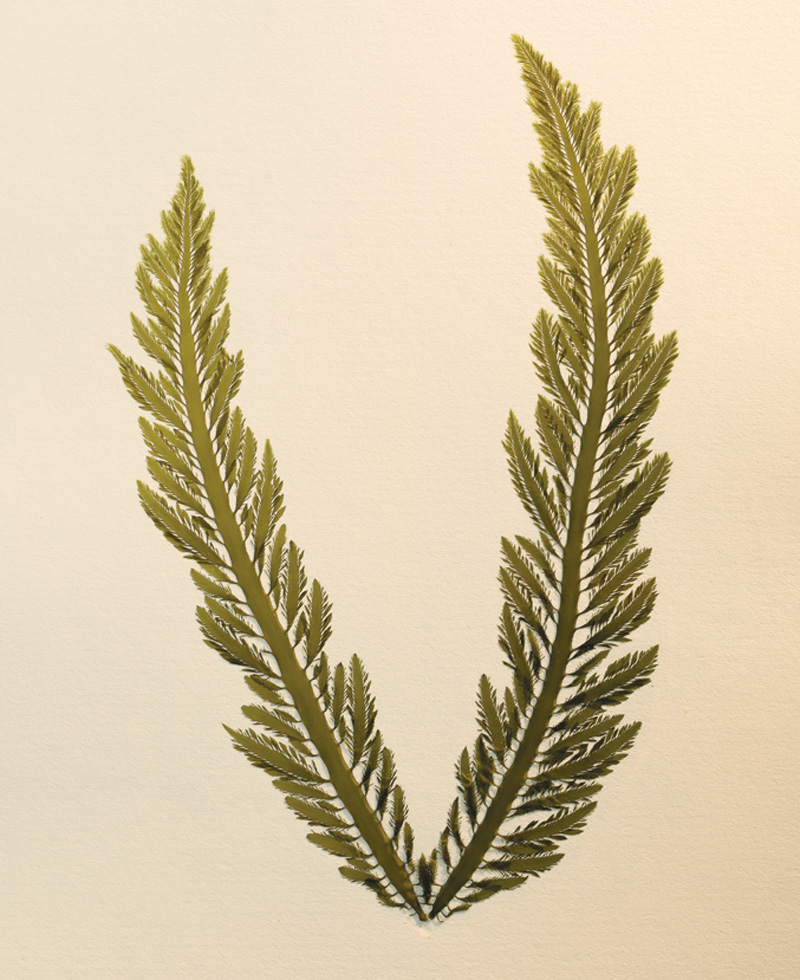 Desmarestia herbacea grows on low intertidal and subtidal rocks along the Sonoma Coast. It is classified as a brown alga, Phaeophyta, named for the characteristic pigments that give most species in this group a brown color in life, often tinged greenish when dried. 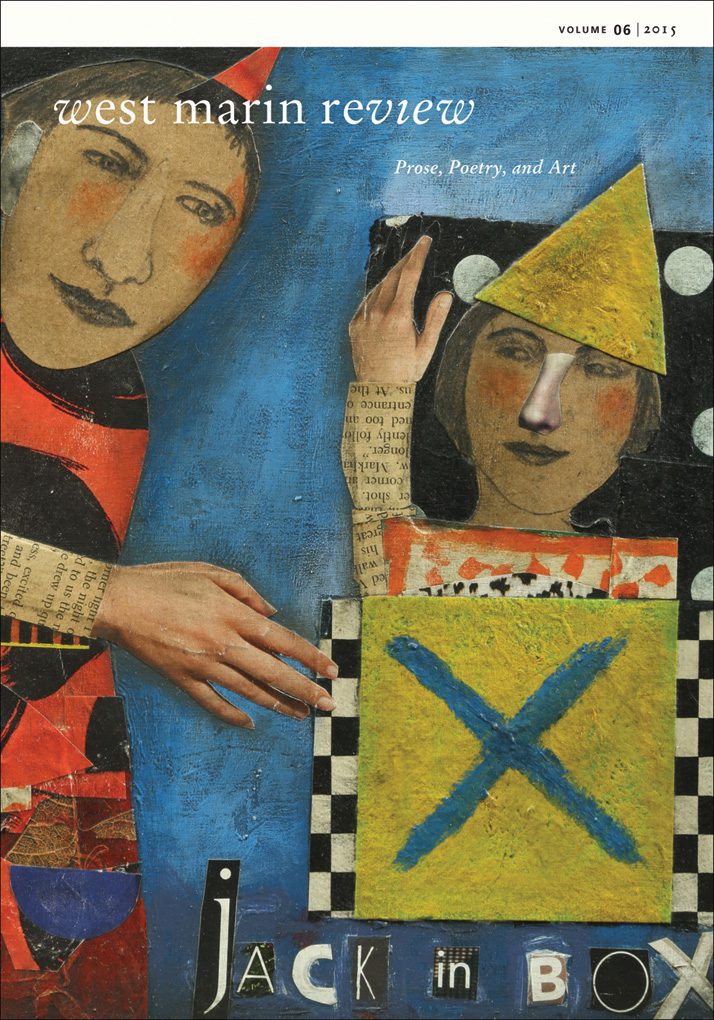