My father was edgy about my Christmas request for a doll. “Gol-darnit,” he was saying to my mother, “where does that kid get his ideas?” What was the problem? My sister had a dozen and I was only asking for one. Innocent of the role of sailors in the gay imagination, he decided the answer was to get me a sailor doll. I named him “Petey.” The first thing I did was shrink his wool uniform in my sister’s doll washing machine. I took him to school anyway, for show and tell, unclad except for pinched-looking little black sailor oxfords.

Ever hopeful, my father bought me a kid-sized football uniform, complete with ungainly plastic shoulder pads and an ear-crunching, vision-obscuring helmet. He dressed me up in it and sent me down to the vacant lot where the neighborhood kids ran a pickup game. Briefly awed by my official-looking getup, they abandoned previous custom and handed me the ball. For a long five or six seconds all of us stood there, frozen, wondering whether my costume had transformed me into a credible athlete. Then they recollected themselves, unceremoniously threw me to the ground, and punched away any thought of equipment-based advantage.

I meant to buy a practical sedan. I came home with a mean-looking Chevy Camaro instead. Not much of a back seat, but the children were still small. I settled for the six-cylinder model. “Some car,” my friends said. “Like Paul,” my wife said. “Looks good but not much under the hood.” No wonder that marriage didn’t last. My next car was a Prelude, also low slung. Claire was sitting in it at the gas station. She became convinced that a guy was hanging around and ogling her. I gave him a look. He said, “You wanna sell that car?”

Unchained country dogs always went after Ray: snarled, nipped at him in passing, reluctantly fell away. Because he was always out front, toiling, they considered him leader of our two-man pack. Or maybe the opposite: viewed him as the weak link, sensed in him some sweat drenched vulnerability. Ray was a pessimist, always braced for a bad outcome. His biggest gripe was about hills, at least the downhill kind. “Uh-oh,” he’d say, when we came to one. Starting a downhill swoop, rather than enjoy the effortless movement, he’d imagine the climb ahead. “This’ll cost us,” he’d mutter. “We’ll pay for this.”

Exasperated with our failing marriage, my wife expressed herself by breaking dishes. She’d go in after dinner, wash a few, and then: zing! crash!—a plate would hit the floor. Our registered “wedding china”—Dansk Spisa Ribb—was going fast. After the divorce I housesat for a friend whose kitchen was stocked with the same pattern. One morning I was asleep upstairs when my still-angry wife staged a home invasion. Whatever her objective, upon entering the kitchen by the screen door she spied this new trove. I was awakened by the familiar sound: Spisa Ribb shattering on tiled floor.

I drove up to Point Arena to see about seafood. Out on the pier some seasoned-looking guys were bringing in rockfish, still flopping around and with goggley eyes. They sold me a couple, at a tourist price, but I was enjoying the camaraderie. I hovered while they spouted various extreme views, complaining about things like chickenshits who wanted to turn the Point into a marine sanctuary. When I came off the pier a guy asked me, “What’re you catching?” I said, kinda casually, “Rockfish.” He said, “How deep?” “Actually,” I confessed, “I bought these.” He brushed past, averting his gaze.

Claire is telling me about the Writers’ Colony, where she hung around with an eminent poet. It seems that he has a formidable member. That’s a line of thought I’d rather not pursue, or anyway it evokes a succession of images I can do without. I don’t know much about writers’ colonies, except of course for their legendary promiscuity. But this one is also known for its spontaneous events, like midnight swims. Maybe that’s where she got a look at this guy’s equipment. “So you met him on one of those midnight swims?” I suggest. “No,” she says, “not really….”

Carolyn and I were fly-fishing in the Florida Keys. As novices, we had a guide. We were after tarpon and bonefish, but they weren’t running. The guide suggested we go for shark instead. He started throwing bloody chum in the water and sharks gathered around the little flat-bottomed boat. I caught one right away and then Carolyn followed up by catching two. You get a nickname on a fishing trip. On land everybody started calling her “Two-Shark.” Oh, I had a name too, but based on a snack item I had brought along: “Mr. Peanut.” Not quite the same, somehow. 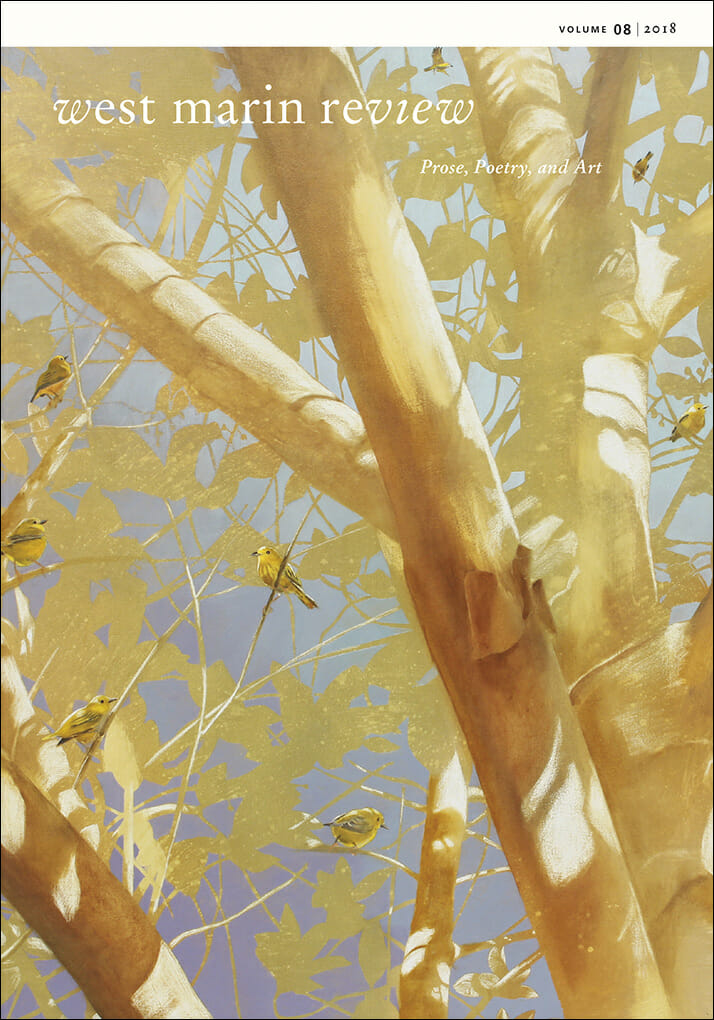